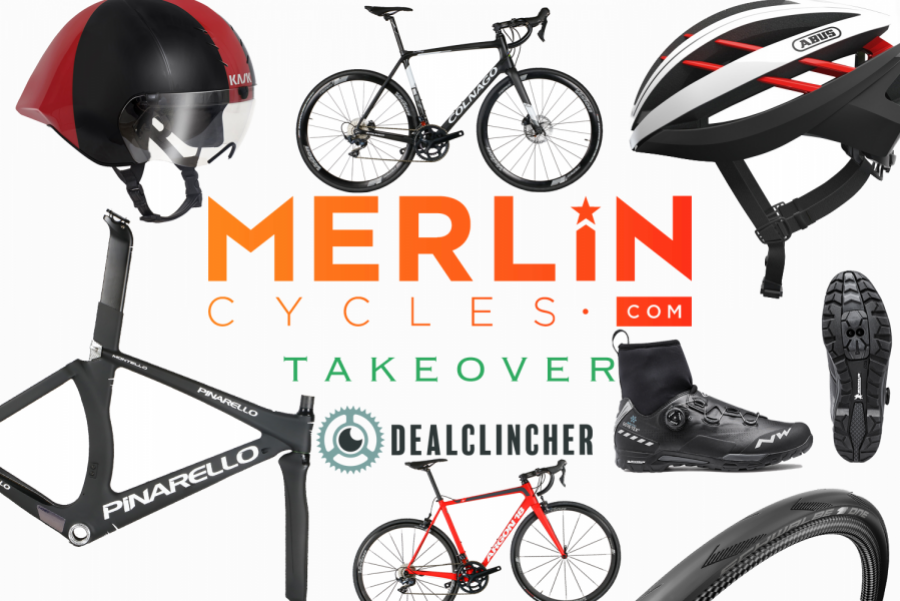 Merlin Cycles have some cracking deals in this week’s takeover with brands like Giro and Abus providing the helmet deals, bikes from Argon 18 and Colnago, a lovely Pinarello frameset and loads more to get stuck into.

First up are a couple of excellent helmet deals and this Abus is an ideal option for riding in the hot weather that we’ve been having recently.

There’s plenty of airflow from the large vents and Abus’ Eyewear dock helps you to store your shades safely.

You can also get a great price on Giro’s Aether helmet that combines large vents with a sleek design.

The Aether also contains a Mips liner which is claimed to help in crashes by reducing the rotational forces acting on the brain.

The first of our bike deals today is a whopping 36% off this excellent Argon18.

Argon18’s Gallium CS offers a lightweight carbon frame with bags of stiffness along with Shimano’s excellent Ultegra 11-speed groupset and Vision wheels to make a bike that is perfect for general riding and smashing the climbs.

The gearing is set up for climbing with the 50/34T chainset paired with an 11-32T cassette for a wide spread of gears.

If you want the power and modulation of disc brakes then this Colnago is a great option.

The CLX Disc is designed for fast riding in comfort with the 28mm tyres allowing you to float over broken surfaces.

Again, Shimano provides their Ultegra groupset, but this time with their excellent hydraulic disc brakes, giving you increased stopping power and control.

It looks like time trials are set to be the only form of road racing allowed back in 2020, so if you’re looking to build up a race rig, then a TT frameset is the place to start.

At a staggering 84% off, this is certainly one to take a close look at.

You’re going to need a great groupset to build up your new bike and in our opinion, Shimano’s Dura-Ace Di2 Disc-Brake groupset is the best out there.

Yes, you still have wires connecting things up internally, but you only need to put it all together once. After that, the shifting quality is far better and worth any initial wiring hassle.

Up to 69% off Schwalbe One V-Guard Evolution Road Tyre

Got your bike out of the shed and realised that the tyres are down to the carcass? You don’t need to spend a load of money to get good tyres.

The best price on these Schwalbe One tyres is on the 23mm version, though we’d spend a bit extra for the 25mm version, provided your frame can fit them.

We’ll whisper it because we no one wants to believe it, but winter is but a few short months away. We can hear the collective sigh.

If you struggle with cold toes in the colder weather then some proper winter boots would make a great investment.

These Northwave boots come with a dial closure system and the ability to use them with or without cleats.

As one of the first things to hit the wind, your head needs to be covered by something slippery.

Kask’s Mistral is named after the strong winds that blow down in southern France and is apparently rather quick if you believe the data.

The helmet comes with a magnetic visor and there are six small vents in the front to give a little cooling airflow.