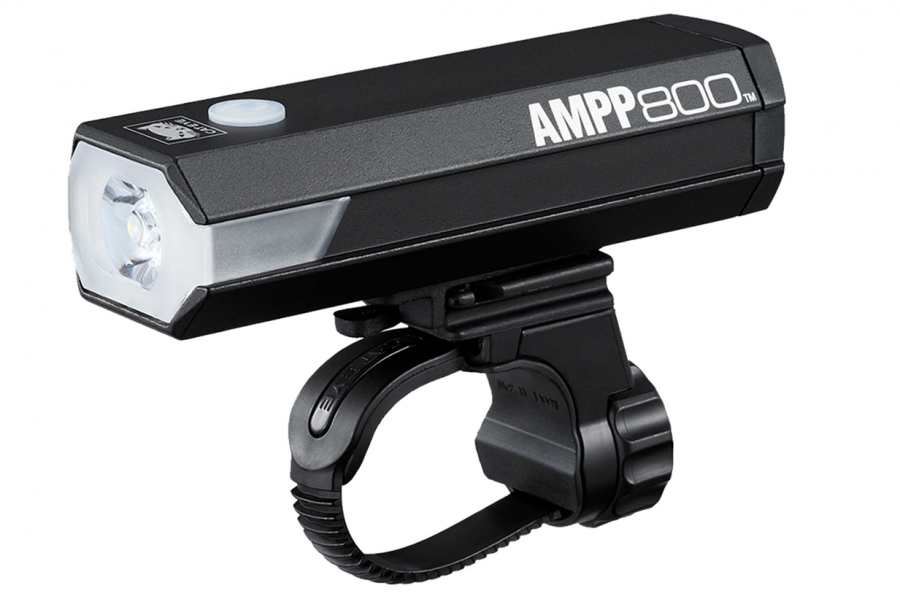 If you like to ride after work in the summer, chances are you might be tempted to end your ride at a bar. It's happened before and we're big fans of a post-ride hydration beer, especially when the weather is warm.

Usually, one beer turns into two and a pizza and before we know it the sun has gone. You can either sack off the 2nd beer or take a light. Shock and horror, we choose the light and 2nd beer option!

Once the winter rolls around, the lights never come off our bike. They provide extra visibility in the low winter daylight and allow us to see on unlit roads when the sun goes down at mid-afternoon.

This Cateye AMPP 800 has, like the name suggests, 800 lumens which are more than enough for evening rides.

One annoying thing about carrying a light can be the bulk and weight. But this AMPP 800 is both compact and lightweight at only 137g.

Attaching the light to the bars is really simple with a dial and strap fixing the light in place. That also means it's easy to whip off and store in your pocket until needed.

CatEye is the leading manufacturer of cycle computers, lights and reflectors to cyclists in the world. Founded in 1954 in Osaka, Japan, CatEye has always been a leader in innovation and technology.
In 1964, CatEye created the first flashing lamp for bicycles. CatEye went on to create the very first bicycle head lamp using white LEDs in 2001. The company is truly a world leader in lens and reflector technology.
CatEye's first cycle computer was released in 1981. Now we offer a full range of computers to meet the demands of cyclists around the globe. Always at the cutting edge of technology, we were among the first companies to integrate altimeter, heart rate, and cadence technology into cycle computers.
From it's head office in Osaka, Japan, CatEye manages two factories in Japan and one in China, and is an ISO approved manufacturer. On the leading edge of technology, CatEye continues to innovate and lead the industry in bicycle electronics, and is committed to safety and comfort in cycling.

In 1921, the first shop of F.W. Evans Cycles opened on the Kennington Road in south-east London. The 1950s saw Evans become a cycle-specific retailer and the company grew over the next 40 years before, in the 1990s, the Evans Cycles Mail Order catalogue was launched, enabling Evans Cycles to supply a wider range of products to a much larger audience. This required the opening of a central distribution centre in Leatherhead, Surrey from where the first version of the Evans Cycles website was launched.

The company now offers a range of services like click and collect, harnessing its network of local Evans stores. The brand also runs a range of Ride It events across the UK and offers a number of schemes relating to the government’s Cycle to Work scheme, promoting cycling through tax incentives on the cost of a new bike.

Evans also has a number of in-house brands such as Pinnacle and FWE while also working in collaboration with Olympic champion Sir Chris Hoy to launch HOY Bikes.