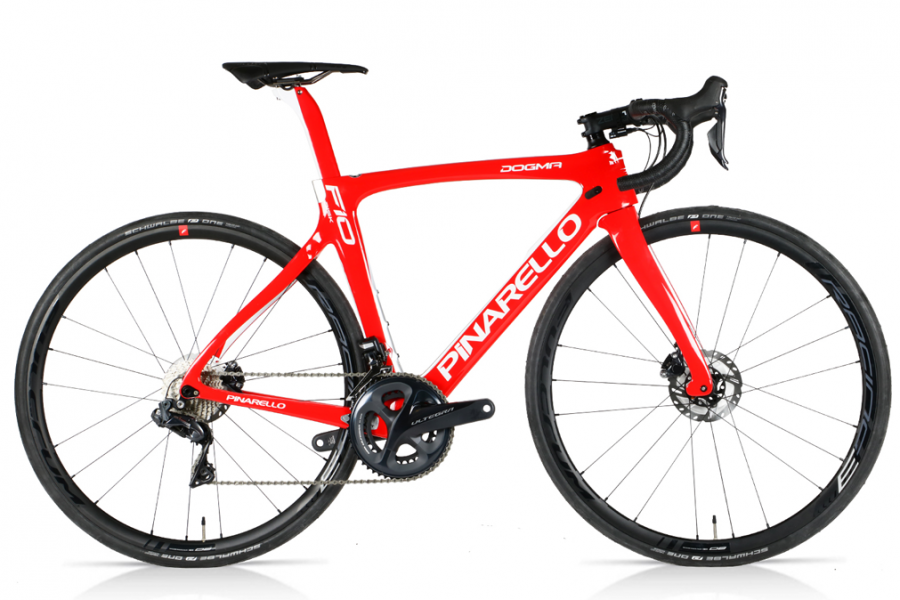 Pinarello's Dogma F10 is a bike that has won mountain stages in the biggest races and flies along in flat races too.

Pinarello gained massive popularity here in the UK when they sponsored Team Sky from the team's creation in 2010. In fact, it has made the Italian bike brand incredibly popular in the UK and beyond, thanks mostly to Team Sky's success in the Tour de France after only a few years in the sport.

Up to 56% off Vittoria Cora G Road Tyres

Since then, the wavy lines on the Italian frames have become synonymous with the team and their domination of the Tour de France. Pinarello bikes have now been ridden to victory in every Grand Tour, multiple Classics, and countless stage races.

The F10 Disc is not the latest bike in the Pinarello line-up, but it’s still one of the best bikes for racing, fast rides and tough sportives. It is packed with lovely features like an exclusive Toray T1100 1k Dream Carbon with Nano-Alloy technology that often gets used as the outer layer on aircraft.

Pinarello also worked with Jaguar to tune the aerodynamic profile of the tube shapes to help save those precious watts. Pinarello then tested 70 variants of the new frame design and put it through 300 CFD analysis cycles. All of this effort produced a very fast frameset that is still light enough for the long climbs.

This F10 is equipped with disc brakes which are getting much more popular in the pro and amateur pelotons. You also get a full Shimano Ultegra Di2 groupset and Fulcrum wheels.

Cable routing is all internal and you'll be pleased to know that the bottom brackets are threaded.

Giovanni Pinarello, or "Nani" as his friends call him, was born in Catena di Villorba on the 10th July 1922 during a difficult post-war period in Italy. He was the eighth of twelve children.

His love for two wheels and an innate gift as an indomitable fighter led him to pursue a career in cycling. This is the ‘Eroico’ (Heroic) era in cycling:  Coppi, Bartali, Bobet on white roads, difficult, very difficult terrain. But the young Nani immediately attracted attention, winning over 60 races and the tender age of 20 won “la Popolarissima" in Treviso

But it is in 1951 that Nani has his personal date with destiny: racing in the 34th Giro d’Italia, which is won by Rosa Fiorenzo Magni and the great Louis Bobet winning the mountain classification. In last place comes Giovanni, but in those years last place was not a disgrace, instead, the last rider wore the Maglia Nera (Black Jersey). Giovanni loved to tell the stories of the strategies he carried out in order to take this ranking. There have been known cases of cyclists purposely flattening their own tires, hiding in barns or bars in the aim to lose time in order to arrive last in a stage….this was definitely another era of cycling. Arriving last also means a moment of celebration, including a lap of honor with the winners in Vigorelli velodrome. Giovanni did just that on the 10th June 1951 carrying this triumph to Milan between Magni and Bobet.

In 2009, now on his umpteenth intuition, Fausto joins forces with the small newborn Team Sky, who will soon dominate the cycling world.