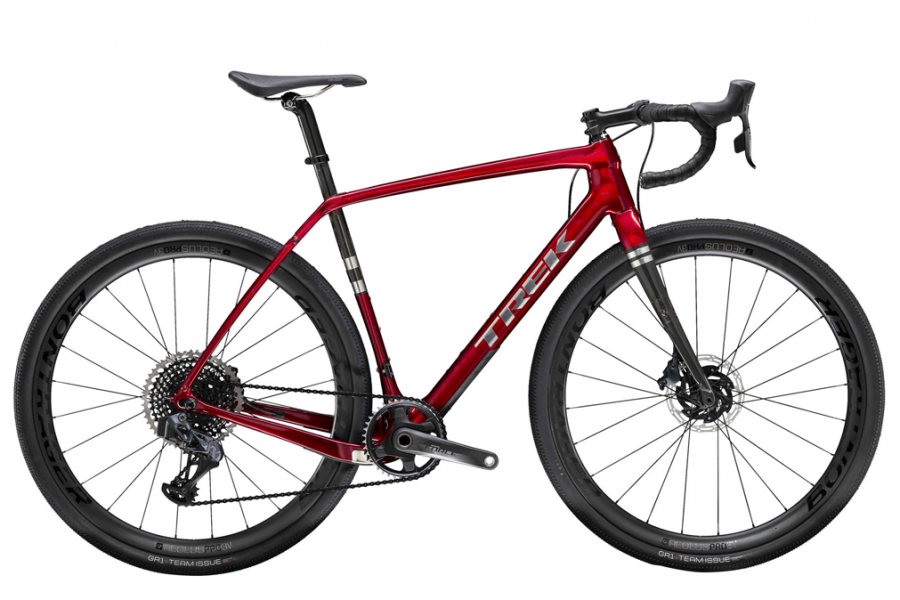 This high-end gravel bike is ready for adventures.

Gravel bikes might seem like a bit of an N+1 dream if you don't live in a particularly good gravel area, but we're seeing a lot of gravel bikes popping up as winter bikes. The shift in popularity is due to a number of great features that gravel bikes boast.

Firstly, many gravel bikes offer a much more relaxed riding position to give you more comfort over difficult terrain and longer rides. They also have space for nice wide tyres which not only offer better traction over loose and wet ground, but also a much more cushioned ride on the road that isn't a whole lot slower.

If you've been doing a lot of road riding over the summer then throwing in some off-road sections during the winter can help to keep the fun in cycling and allow you to explore new roads and link up trails.

The Checkpoint SL 7 features a lightweight carbon frame using Trek’s 500 series carbon. The frame comes ready to be loaded up with mounts for several bottle cages, mudguards and luggage racks.

That makes this a brilliant option if you’re looking for a gravel bike that will double-up as a posh commuter bike.

Eighty years before Trek's founders would make Waterloo, Wisconsin, the home of their new venture, the Waterloo Driving Park Association was formed in the town’s southwest corner. Preceding Henry Ford’s introduction of his first car by two years, “driving” held a different meaning — namely, racing horses and bicycles. Here, Waterloo residents gathered around a dirt track to commune, cheer and test themselves against one another in competition. Humans race for fun, for excitement, for the challenge. Competition is intrinsic to our nature. As long as there have been bicycles there has been bicycle racing. 84 years after the first intrepid cyclists battled on that oval of dirt, Trek broke ground on a new headquarters across the street. Today, Trek overlooks that storied land. The track is no longer there, but human nature remains. Racing has always been what we do.

Established in 1981, Rutland Cycling is now a second-generation family business with 12 stores and an industry-leading website. Rutland's stores feature dedicated Electric Bike Centres and offer a wide range of products and services to all types of cyclists, from children learning to ride their first bike, through to performance athletes.

Much has changed in the world of cycling since 1981, but we remain committed to the same vision: to inspire more people to get out and ride a bike. For us, it's about much more than just selling bicycles — we're here to help people achieve their cycling goals. As we've grown, our family values have helped us build a strong team ethos and keep us focused on delivering an excellent experience for our customers.

We believe passionately that to get more people making cycling part of their lives, you've got to make it convenient and easy. So, in our Rutland Cycling stores, you can hire a bike or e-bike, get your own bike repaired or book a Retul bike fit 7 days a week, borrow a courtesy bike while your bike is serviced, and pick up cycle clothing, spares and accessories. We also believe in leading by example and inspiring new cyclists to give it a go, and so we offer demo bikes, led rides, including women-only rides, and bike maintenance classes for all cyclists. In the end, it's all about going the extra mile, both for our customers and each other.